A new report from the Private Equity Stakeholder Project examines how private equity groups are investing in the troubled teen industry – specifically for-profit foster care, services for young people with intellectual and developmental disabilities (I /DD) and autism services. Some of these companies are linked to lawsuits and investigations related to allegations of abuse.

The Rhode Island Pension Plan has investments in two of the three companies identified in the report as investing in such companies.

The Rhode Island Employees Retirement System (ERSRI) is chaired by Rhode Island Treasurer General Seth Magaziner, and according to pension fund documents, the fund has tens of millions invested in Centerbridge and Bain.

According to the report, “Several of the largest private equity firms operating in these sectors have a history of widespread neglect and abuse of young people in their care, including the excessive use of physical restraints on children with disabilities ( Advoserv – GI Partners), squalid living conditions in group homes and foster homes (Sequel Youth & Family Services – Altamont Capital Partners), and neglect that has resulted in many deaths (The Mentor Network – Centerbridge Partners, the Vistria group).” 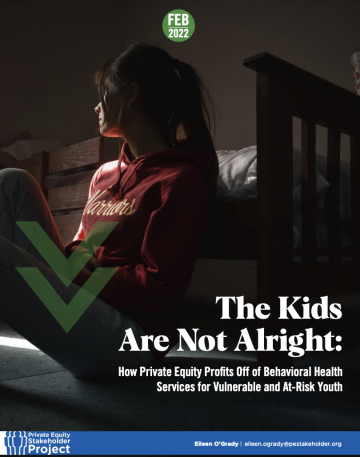 See the link to the full report below, in the article.

Key points – According to the report published this week

The mission of the Private Equity Stakeholder Project is “to identify, engage and connect stakeholders relevant to private equity with the aim of engaging investors and empowering communities, working families and others. people affected by risk capital investments”.

According to their report:

– Private equity has a troubling record of investing in youth behavioral services. The private equity business model, which focuses on outsized short-term returns, may prioritize profit over the welfare of children. Cost-cutting tactics in privately owned youth behavioral businesses, such as downsizing, using unlicensed staff, and failing to maintain facilities, can lead to abuse, neglect, and dangerous living conditions for the young people cared for by these companies.

– Despite horrendous conditions at some youth behavioral health companies, their private equity owners have in some cases reaped huge profits.

Aspen Educational Group has been the subject of numerous investigations over the past 15 years.

“A 2014 lawsuit against Island View’s parent company, Aspen Education, alleged that the center “maintained a prison-like environment where physical and psychological torture was used against students.” [reporter Sebastien] writes Murdock. As 25-year-old former Island View resident Michelle Lemcke said, “Long-term treatment centers are like… a prison without having done anything illegal,” Slate reported.

Similarly, Mentor Network was the subject of a congressional investigation that began in 2018. In 2019, the Senate Finance Committee released a statement from Chairman Chuck Grassley of Iowa and Ranking Member Ron Wyden of Oregon announcing that they were seeking information from two companies affiliated with The MENTOR Network (Mentor) after recent news reports in Iowa and Oregon revealed multiple cases of abuse and neglect, and in one instance, a apparent death. Mentor contracts with both states to provide care for adults and children with intellectual and developmental disabilities.

“When vulnerable Americans are abused or even killed in the care of a taxpayer-funded care provider, that organization must be held accountable,” Grassley and Wyden said. “The finance committee has already investigated the MENTOR network for failing to protect the people it cares for, and tragically there is still work to be done. No one should have to fear for the safety of their loved ones when they are cared for in a group home.

Mentor was also found to have committed numerous violations in a number of states, including Massachusetts.

The other area that these private equity firms have invested in includes autism service companies.

The RI Treasurer General – and candidate for US Congress – has taken a vocal and militant stance on many state pension investments.

“The private equity firm’s investment in hospital operator Prospect Medical has sparked a political backlash against the fees and dividends the company has received from the hospital operator under its ownership, among other issues,” said writes the WSJ.

In July 2021, Magaziner announced that it was filing a lawsuit on behalf of the RI Employees’ Retirement System of Rhode Island against Facebook.

According to its press release, the lawsuit was to be “filed against certain executives, including co-founder and CEO Mark Zuckerberg and COO Sheryl Sandberg, and members of Facebook’s board of directors (NYSE: FB) alleging breaches of fiduciary duty regarding the Facebook-Cambridge Analytica data privacy scandal.”

But, when GoLocal asked if Magaziner owned or owned any Facebook stock today, his office declined to answer.