For the uninitiated, money market funds are investment products that allow investors to earn interest in a less risky environment than the stock market.

In April 2022, the State Bank of Pakistan (SBP) held an emergency monetary policy meeting and raised the policy rate by 250 basis points (bp) to 12.25% to preserve the stability of the external account and prices in a context of soaring commodity prices.

High commodity prices amid heightened political uncertainty and tight liquidity conditions led to a sharp rise in secondary market yields at all maturities. The 3m, 6m and 1yr yields increased by 265bps, 236bps and 213bps respectively while the 3yr and 5yr yield also increased by 112bps and 65bps respectively.

In April 2022, SBP conducted three treasury bill auctions with a target of 1.7 trillion rupees against a maturity of 1.558 billion rupees.

Based on data compiled by Mettis Global, all 24 funds generated positive returns in April 2022 thanks to a pragmatic yet safe approach. It is relevant to note that only two of them outperformed the benchmark.

To get a clearer picture, we’ve compared the returns of the major money market funds in the chart below against an average benchmark rate; 70% – a 3-month average of PKRV and 30% of the 3-month average deposit rates of 3 MUFAP-selected ‘AA’ rated banks which has been set at 11.45% for April 2022. 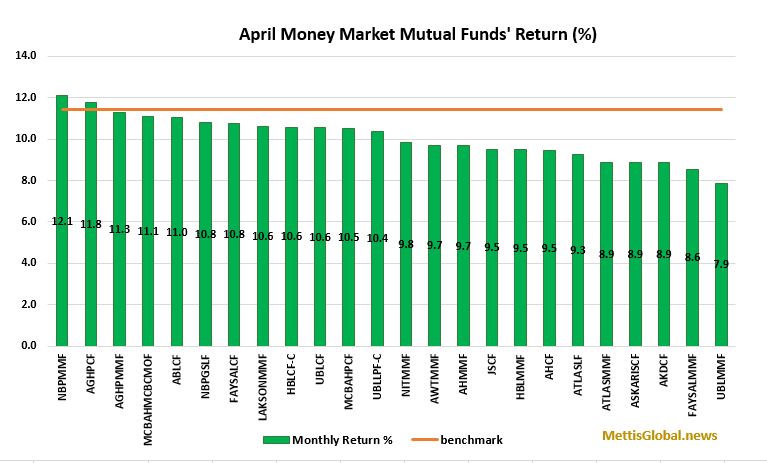 As shown in the chart above, the RNB Money Market Fund (NBMFM) emerged as the winner among all other money market funds which achieved an annualized return of 12.1% during the month, beating the benchmark return of 11.45%.

This outperformance is net of management fees and all other expenses. In order to maintain liquidity, the fund had, at the end of the month, an exposure of approximately 18% in T-Bills, 59.4% in bank deposits and 21.8% in Money Market Placements (LOP).

Regarding the stability of the fund, the Pakistan Credit Rating Agency (PACRA) has rated its stability at “AA”, which means a very strong ability to maintain a relative stability of returns and a very low risk exposure.

According to the data, Alfalah GHP Money Market Fund (AGHPMF) emerged in third position with an annualized return of 11.31% compared to the benchmark return of 11.45%. Cash asset allocation decreased to 42.1% from 76% while placements with banks and DFIs were recorded at 19.3%. The fund had around 26% exposure to Treasuries, up from 22.3% in March 2022.

As for the total assets under management (AUM) of the mutual fund industry, it fell by 5% MoM to 1.07 trillion rupees in April 2022. Analysis by category showed that the AUM of money market funds fell 14% MoM to Rs317bn in April 2022.

Mutual Fund: Three funds have made those who invest little in 7 years also become millionaires

Investing in a mutual fund: keep the tax factor in mind